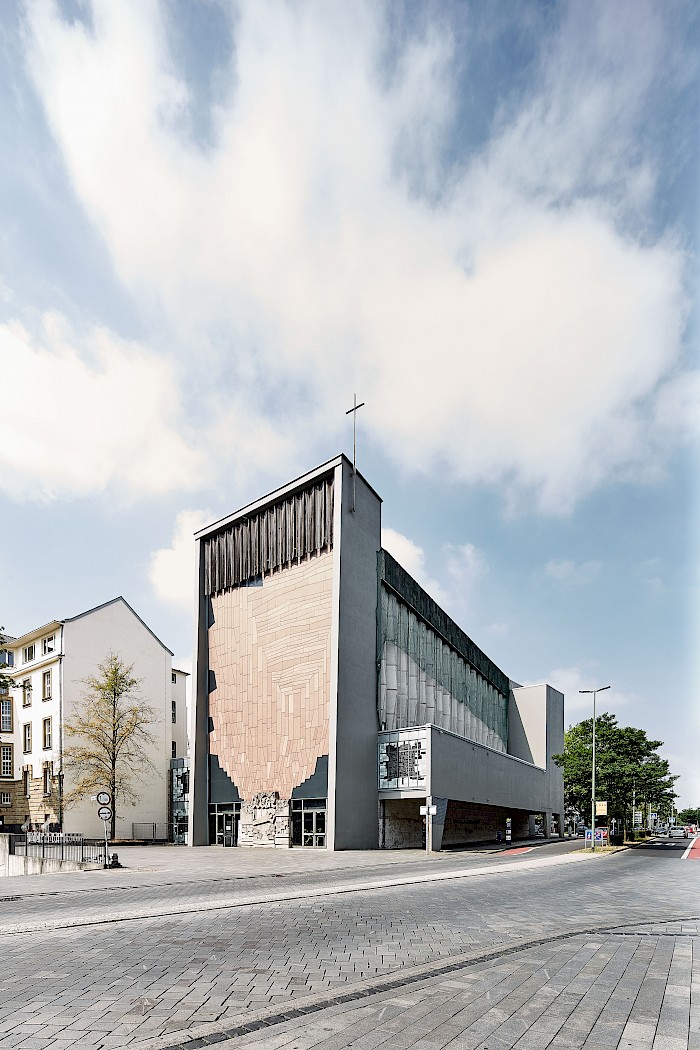 The Catholic Liebfrauenkirche in the centre of Duisburg is one of the most important post-war churches on the Rhine and Ruhr and an exemplary example of civic commitment to the reorientation of profane churches. Its predecessor building, which was located next to the Salvatorkirche near the inner harbour, was destroyed in 1942. The new building was built between 1958 and 1961.

Architect Toni Hermanns, who also designed the St. Barbara church in the Rheinhausen district, designed a two-storey, cubic structure made of reinforced concrete with a flat roof. The facades are clad with irregularly arranged natural stone slabs. On the side of König-Heinrich-Platz is a cuboid-shaped entrance tower, which covers the entire width of the nave and slightly overlooks it in height. Above the main portal is a sandstone relief by the sculptor Karl Heinz Türk. It shows the biblical scene of Moses with the burning thorn bush. 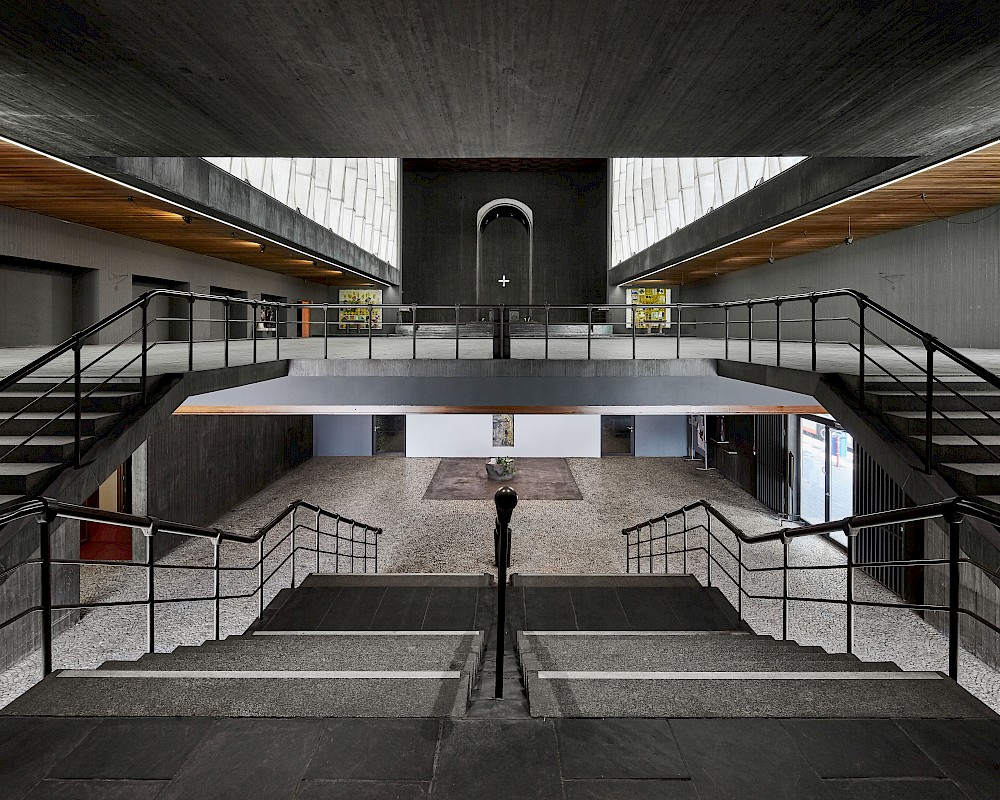 The sacral building is divided into a lower and upper church. The lower church is a smaller prayer room. The upper church consists of three large naves. The aisles of the upper church protrude on the side facing the road and form an arcade below.

The interior is characterised by a folding wall construction made of glass-fibre reinforced Plexiglas through which diffuse light falls. The interior decoration of the church includes preserved furnishings of the war-destroyed predecessor church, but also exhibits from the Vatican pavilion at the 1958 World Exhibition in Brussels, including the altar with canopy and cross, mural paintings around mosaics. 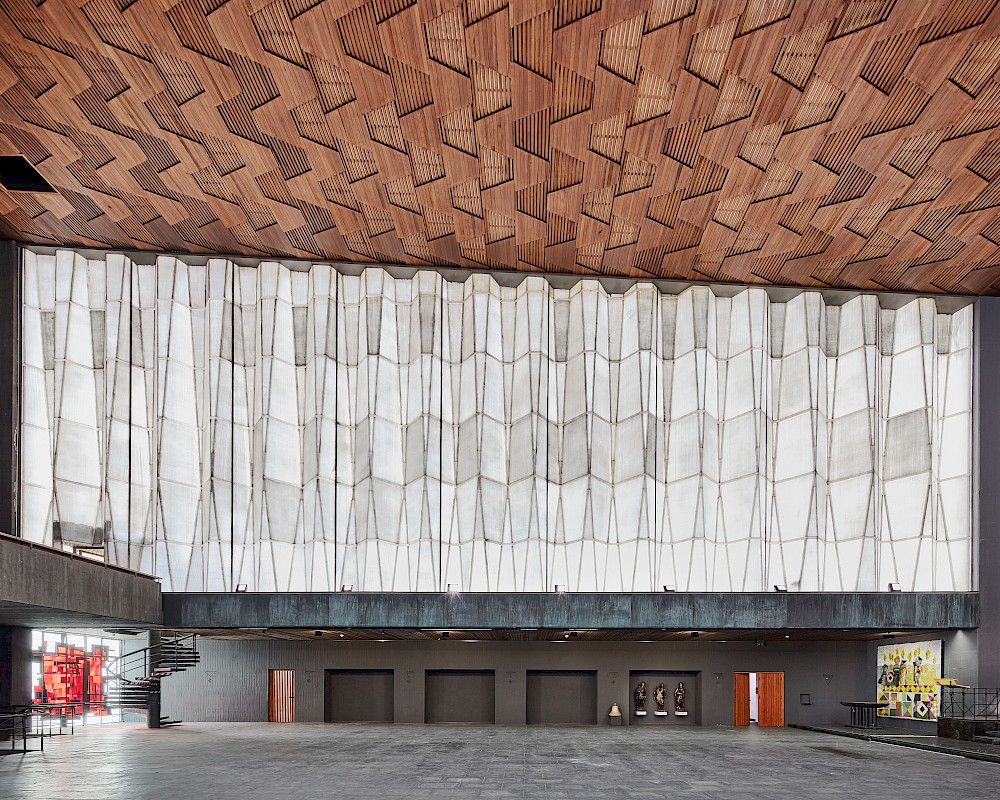 As part of reforms in the Archdiocese of Essen, the church was merged with other parishes in Duisburg and the building was abandoned by the Catholic Church. In 2007, the Liebfrauengemeinde, together with entrepreneurs, representatives of foundations and private individuals, founded the Foundation Brennender Dornbusch, named after the relief on the main facade. Together with funds from the state of North Rhine-Westphalia and the German Foundation for the Protection of Monuments, the building was thus preserved and put to a new use. The lower church continues to serve as a worship service room. The Upper Church was profaned in 2009 and transformed into an art and cultural centre, which is primarily intended to promote dialogue between religions and cultures. The son of the architect, Hannes Hermanns, was responsible for the conversion. 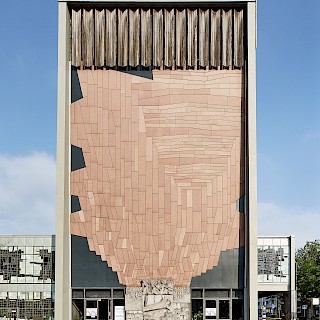 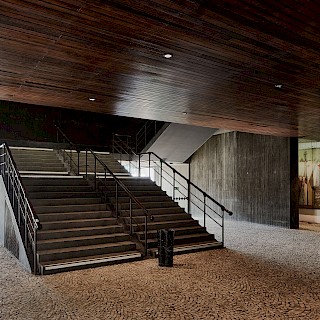 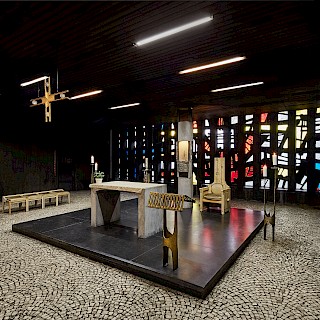 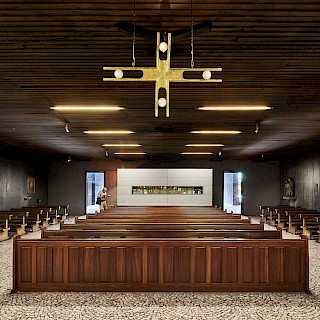 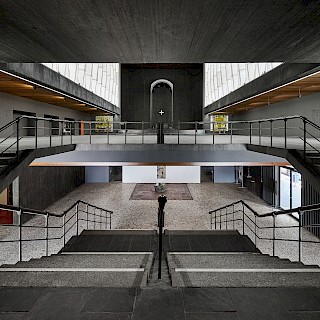 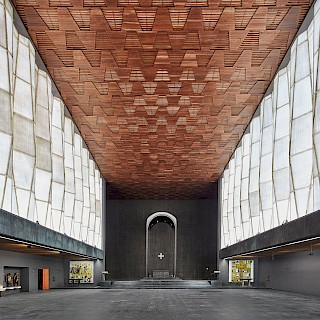 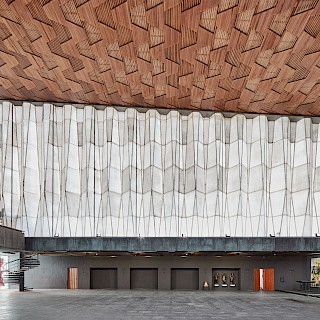 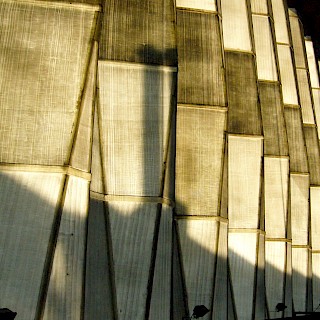