Cafeteria of the Studierendenwerk Dortmund

The Mensa of the Studierendenwerk Dortmund, built between 1974 and 1976 by the architects Walter Henn and Claus Wiechmann from Braunschweig, was designed as a supply facility for about 8000 people and the supply of secondary dining halls. At the beginning of the 1960s, both architects had systematically analysed the planning characteristics of these large-scale catering establishments at the Chair of Building Construction and Industrial Construction at the TH Braunschweig and carried out basic work on the construction of several refectories in the Federal Republic of Germany. 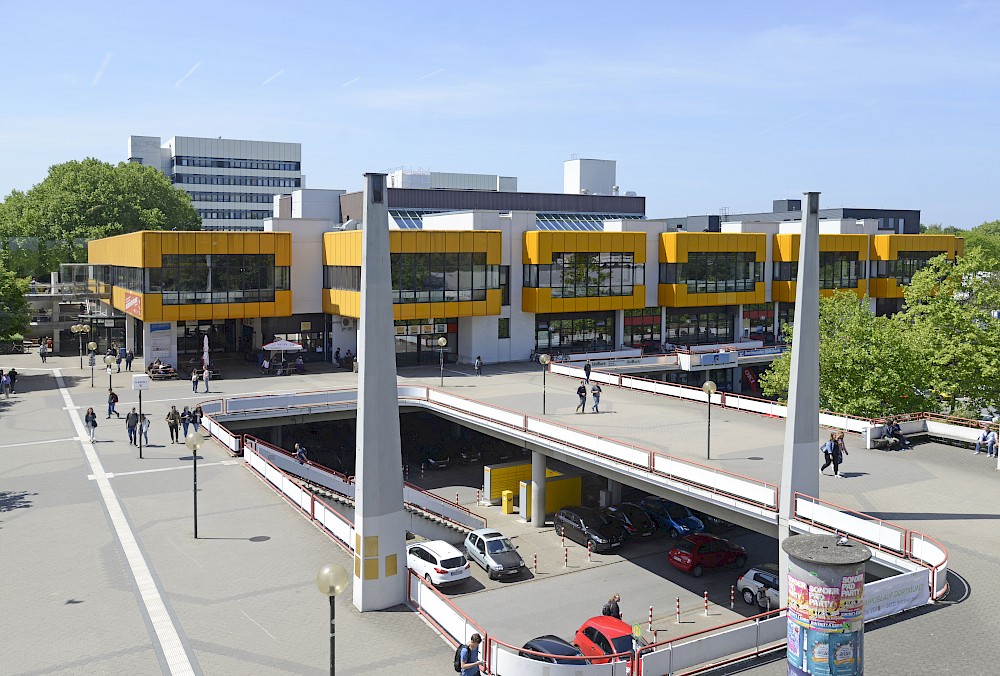 In the beginning, the cafeteria at the TU Dortmund offered 1850 seats in the dining hall, 240 in the cafeteria and 150 in the so-called tavern, i.e. a total of 2240 seats. This requirement meant that the main areas had to be functionally separated. Today, the ground floor houses the central entrance hall with associated shops and administration rooms, which was designed in the style of public boulevards. In addition to the tavern, the basement also includes the delivery area as well as storage and technical rooms. Finally, the dining rooms and the production rooms of the kitchen are located on the upper floor.

Architecturally, the refectory stands out from the other buildings on the northern campus in accordance with its importance as a central facility, as the appearance of the reinforced concrete skeleton structure is essentially characterised by the orange-coloured light metal cladding on the upper storey facades. The colour concept was originally adopted in a differentiated form for the interior design. The main colour carriers here were the suspended metal ceilings as well as the concrete surfaces and staircases. The building itself is accentuated by the fact that the sequence of the dining hall zones and the stairwells assigned to them can be clearly read on the east façade.

Photo: Uwe Grützner
Back to overview