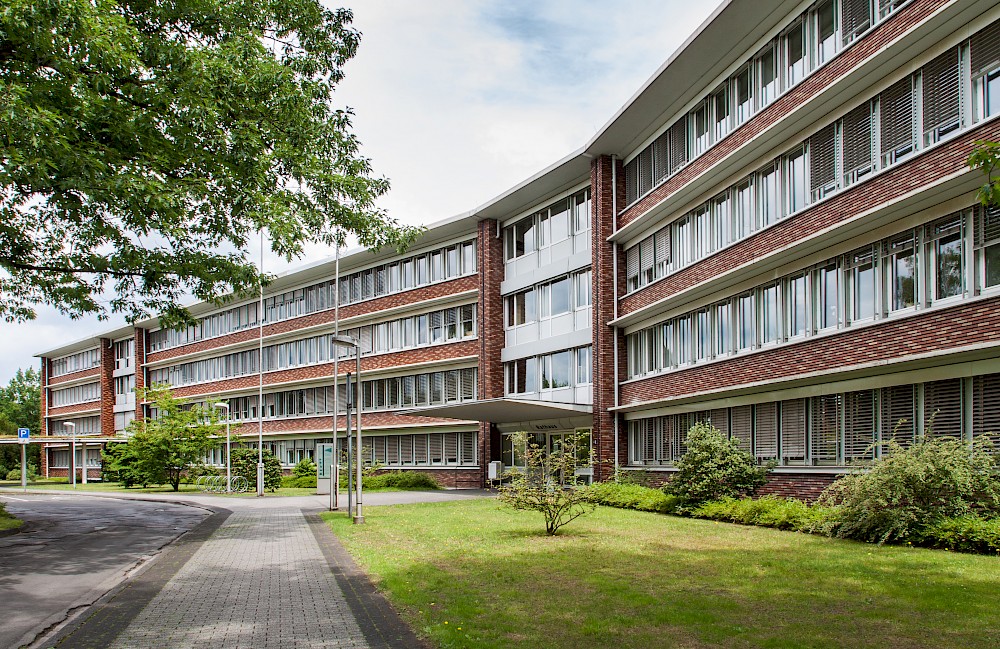 The building complex on Halterner Strasse was built in 1954-56 as the administrative headquarters of the Hervest-Dorsten office, consisting of the town of Groß-Dorsten and the five municipalities of Altschermbeck, Erle, Lembeck, Rhade and Wulfen. Since the municipal area reform in 1975 it has served as the town hall of Dorsten. The design was the result of a competition by the architects Stappmann and Karl-Heinz Schwirtz.

The largest structure of the ensemble is the long, four-storey administrative wing. The horizontal structure of the façade and the slight bend of the building on which the main entrance to the town hall is located are striking. At the back is a two-storey building, which houses the council hall on the first floor and the citizens' office below (formerly the restaurant "Ratsstuben").

Due to the perforated facades on the sides and the curved end face, this building also stands out formally from the other buildings. In this way, the separation of legislative and executive powers was to be expressed architecturally. Also at the back is the entrance to the basement, which used to house police facilities including prison cells and shelter for the homeless, as well as the kitchen, workshop, archive and safe.
Some of these structures can still be seen today. To the west of the administration wing is another independent building. It originally housed the municipal library and later the municipal printing works. Today it is used by the association Cornelia Funke. Elevated on slender concrete bulkheads, this structure "floats" above the site and is connected to the administration wing only by a filigree concrete roof.

The entire ensemble is covered with red clinker and small quantities of yellow clinker, whereby the mixture of both shades varies and gives each building structure its own colouring. This subtly expresses the togetherness and independence of the individual buildings.

The complex is a prime example of a post-war town hall. The asymmetry of the entire complex, its loose embedding in the urban and scenic environment as well as the dissolution of the town hall into different buildings is a clear break with the monumentality of older administrative buildings and reflects the idea of the time to develop an architectural language for the still young, democratic society. In 2018 the ensemble (without health house) was declared a listed building.

Photo: Julia Steinmeyer
Back to overview