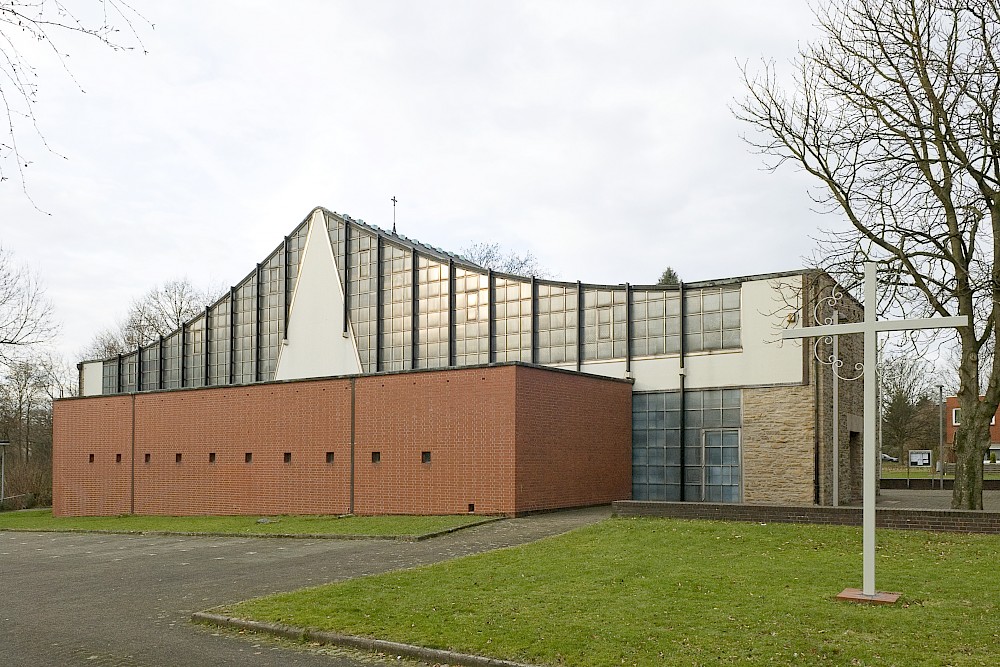 The Heilig Geist (Holy Spirit) Church in Essen-Katernberg was built in 1955-57. The design is by Gottfried Böhm, one of the most important architects of post-war modernism, who also designed the churches St. Albertus Magnus and St. Joseph in Bochum and the parish centre St. Thomas Morus in Gelsenkirchen.

In addition to the church, the ensemble includes four brick houses on a longitudinal ground plan, in which a kindergarten, the rectory, the parsonage and the chaplainage were housed and some of them are still used as such today.
The ground plan of the church consists of a long rectangular room, which is penetrated by a square. Seen from the outside, two flat brick buildings seem to cling to the nave as side aisles. To the north there is a small square annex in which the sacristy is located. On the northeastern corner of the cuboid rises a narrow bell tower, which is much smaller than originally planned.

The walls of the "inserted" central nave stand out from the red bricks of the other parts of the building due to their white colour and the large window areas. The front sides are clad with natural stone. The sloping suspended roof, which slopes sweepingly to the narrow sides, is supported in the middle by two concrete triangular pylons.

The construction is supported by steel cables inside. A horizontal concrete girder runs through the middle of the pylons at roof level of the aisles.

While the outside gives the impression of two interlocking buildings, the inside creates a uniform spatial effect under the tent roof.At its highest point, at the top of the pylon, the interior is 15 metres high.
The rows of benches are aligned to a simple marble altar, which stands in the center of the church. Gottfried Böhm designed it himself, as well as the confessional and baptismal font.
The windows of the Heilig Geist Church were redesigned in 1987 by the glass artist Hans-Joachim Klos.