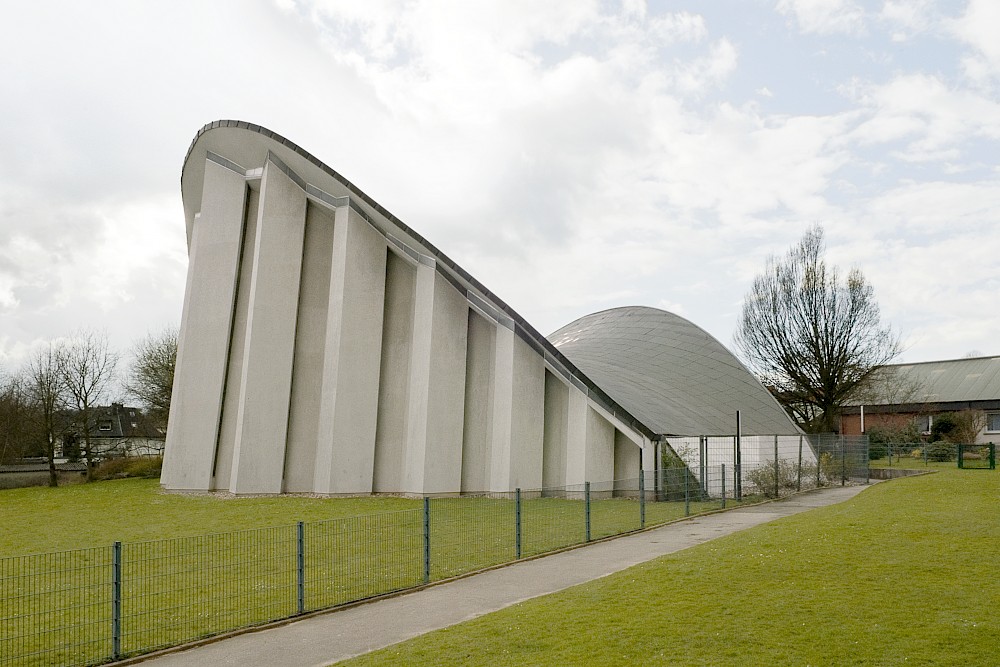 St. Suitbert is one of the parish churches of the Catholic parish St. Josef Ruhrhalbinsel in the middle of the residential area Überruhr-Holthausen in the south of Essen. In 1961 the architect Josef Lehmbrock and the civil engineer Stefan Polónyi were awarded the contract for a new building with a parish centre and kindergarten. The ground was broken in September 1963 and the church was consecrated in April 1966. Next to the church there is a steel frame with a small bronze bell - a bell tower planned by the architect with connection to the church was not built for financial reasons.

St. Suitbert combines the Lehmbruck’s sober concrete aesthetics with Polónyi's bold structural system. The church stands out from the rest of the surrounding buildings due to its extraordinary sculptural form. The roof shell is a self-supporting concrete shell construction only a few centimetres thick. As a hyperbolic paraboloid it is a double curved saddle that spans the church space like a tent with a width of 31x22 meters. The entire roof load is carried by the two massive walls on the narrow sides of the building, which curve inwards here in an elliptical ground plan.

The "folded" walls on the long sides, on the other hand, are not load-bearing and are connected to each other by narrow glass strips. Towards the middle, the width and height of the concrete strips increases, emphasizing the altar area. The original exposed concrete was subsequently plastered white.

The narrow light bands between the wall elements continue under the roof shell and allow diffuse daylight to enter.

The interior reflects the liturgical reform of the 1960s. Although the altar is the central, structurally emphasised element, the fan-shaped arrangement of the benches means that the congregation is included in the divine service.

The original plain furnishings - altar, ambo and tabernacle made of marble - were designed by architect Lehmbrock. A confessional is housed in each of the two strong walls of the abutments. A wooden cross, the Stations of the Cross cycle and an Easter chandelier by the artist Willi Dirx were not added until the renovation work in 1988-1990. In addition, a semicircular wall shell was erected between the entrance wall and the northern retaining wall, in which an icon of the Virgin Mary is placed. On the opposite side another confessional was added. A choir gallery was built above the entrance area.

The stone slab floor was replaced by head wood paving and the interior walls were provided with a new colouring that took away the typical architectural aesthetics of exposed concrete.