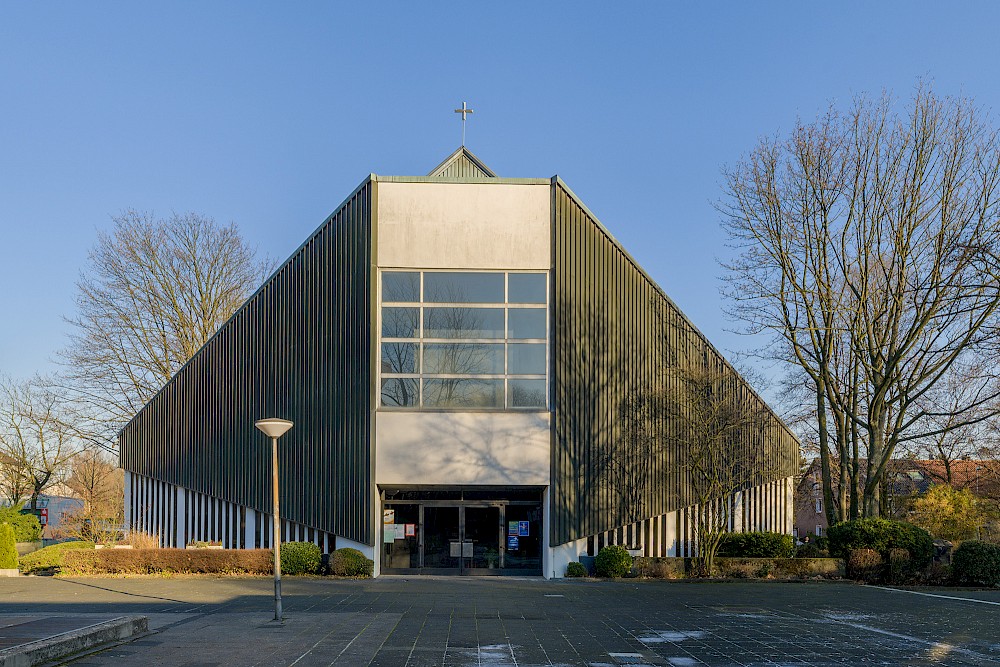 The Thomaskirche is located in Gelsenkirchen Buer-Erle and was built from 1964-65 by Albrecht Egon Wittig and Fred Janowski. The district development was characterized by suburbanization and subdivision of the communities, which is reflected in the relatively small church building, which became necessary as a replacement for the previous "shop church" under the parish apartment.

Despite its small size, the Thomaskirche in the mid-1960s, with its strict crystalline special form, represented a highly modern building whose urban effect is still very striking today. While the eastern end of the building is shaped as a bow-like top, into which a bell storey was integrated, the western top was "cut off" vertically in favour of the main entrance. Above a pentagonal ground plan rises a base zone formed with narrow glazed concrete lamellas, which is ascending in the north and south. The upper zone is largely closed and has been covered with dark copper since 1989.

Inside, the spacious church hall extends over an almost square floor plan with various corner installations and bevels in the western foyer, above which an organ gallery with a floating effect is set up. In the east, the sacristy and the staircase to the bell storey are spatially separated behind a concrete wall. A sail-like folded, suspended ceiling, white painted walls and a dark granite floor complete the spatial impression together with the principal pieces also designed by the architects. The eastern rear wall was designed by Heinz Nickel with cubic concrete elements and appears as a cross shape depending on the incidence of light. A small relief with the patron saint of the Catholic neighbouring church St. Suitbert in the anteroom stands as a sign of ecumenical solidarity.

The St. Thomas Church reflects the two architects' love of experimentation in their different ground plans and outlines as well as in the square rooms, some of which are used diagonally. The benches, arranged in three parts around a liturgical zone, with a central baptismal font and a slightly raised altar and pulpit in front of the eastern rear wall, show the deliberate turning away from a liturgical-hierarchical concept towards a complete work of art designed for the community and realised in architectural terms. This makes the listed Thomaskirche one of the highlights of Protestant church building in the 1960s in the area of the Protestant Church of Westphalia.