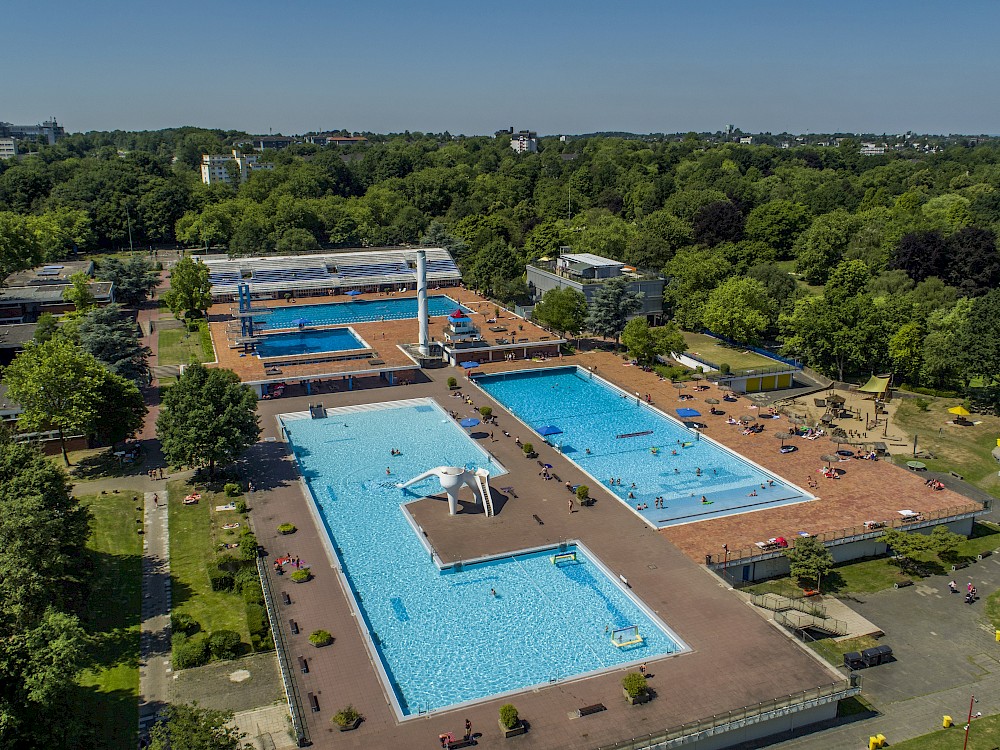 Like Messe Essen, Grugahalle and Grugapark, Grugabad is part of the grounds laid out for the Große Ruhrländische Gartenschau, a garden exhibition, in 1929 and supplemented with a number of formative buildings in advance of the 1965 Federal Horticulture Show.

It was designed by Gerd Lichtenhahn, who was also involved in the construction of the Grugahalle. With a total area of around 58,000 square metres, it is the largest open-air swimming pool in Essen. Four swimming pools of different sizes are arranged on two levels, which are connected by a spiral staircase. In the middle is the striking chimney of the original heating system, which has been out of operation since 2012. Since then, the bath has been connected to the biomass heating plant of the Grugapark. 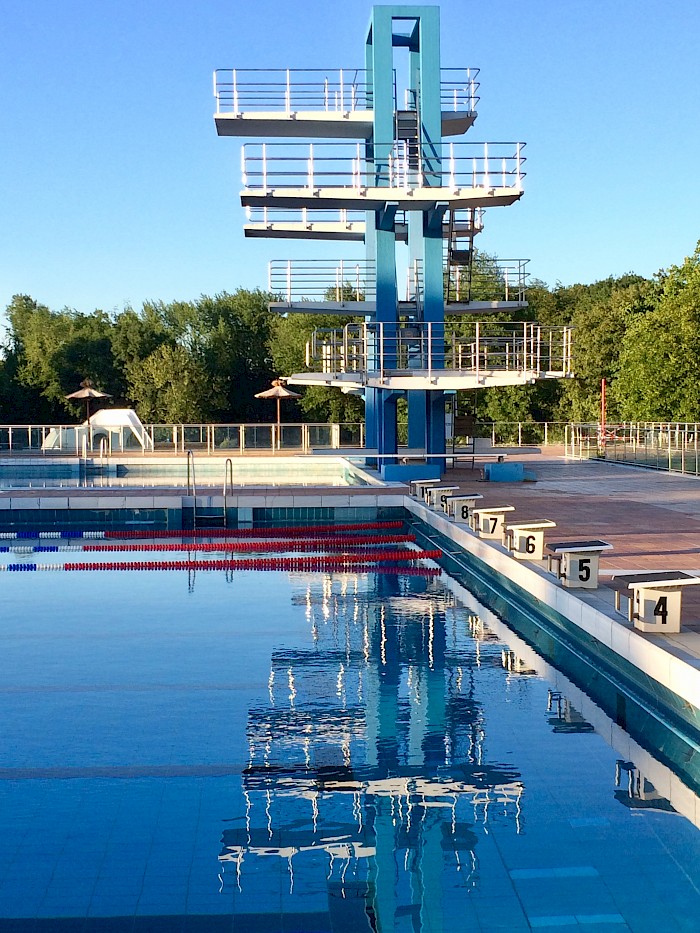 On the upper level is a heated 50-metre pool with ten lanes. Next to it is a 4.50 meter deep and 20 x 20 meter large jumping pool with a 10 meter diving platform. Nine underwater windows make it possible to watch the jumpers from the kiosk below. In the tribune to the west, 700 spectators can watch the sporting competitions.

The lower platform is for recreational fun. The 22 x 63 metre heated wave pool was one of the first wave pools in Germany at that time. Next to the 25 x 80 metre non-swimmer pool is the so-called elephant slide. The two different lengths of the sculptural structure are reminiscent of elephant's trunk. 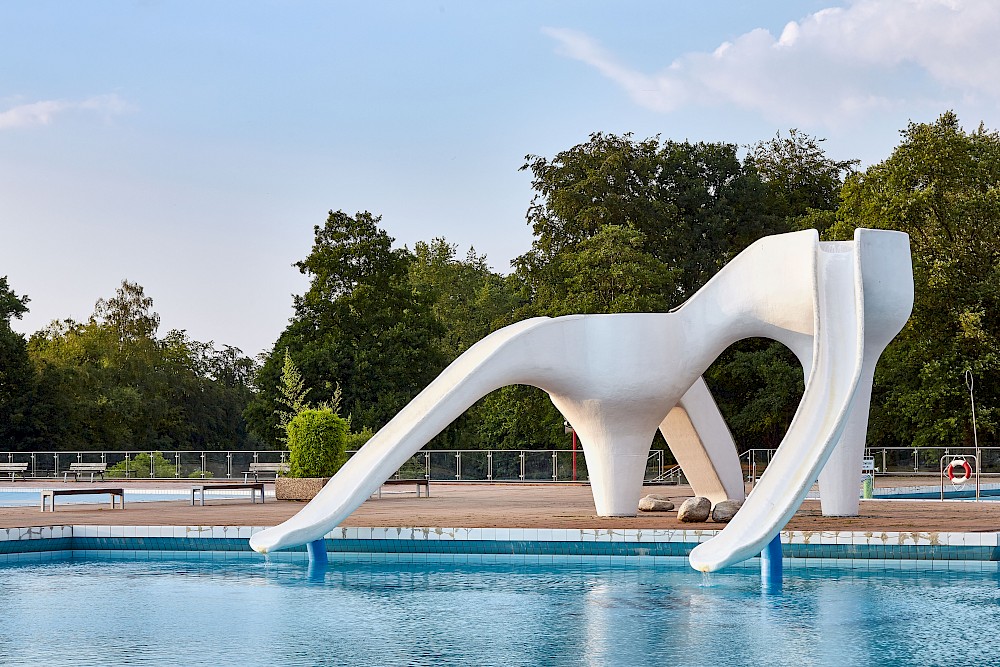 Behind it are around 25,000 square metres of lying area with children's playgrounds and paddling pool. Plant beds with concrete frames were also part of the original design concept, but are only partially preserved. Three cubic buildings facing the street house the changing rooms and sanitary facilities. Next to it is the caretaker's flat. The buildings are steel skeleton constructions and fenced with bricks. The main entrance, which was in the southwest, was demolished around 1990.

The restaurant on the outdoor swimming pool grounds was converted into a day care centre in 2009 after a long period of vacancy. Although some modernisation measures were carried out in 2012, there is an enormous backlog of renovation work for the Grugabad. The State Office for the Preservation of Monuments approves the entry of the swimming pool and its outdoor facilities on the monument list. However, the procedure is still open. In 2017, the city of Essen carried out the"Zukunft Grugabad" participation process in order to find ideas for further operations. Now a feasibility study and a marketing strategy are to be commissioned (as of January 2018). 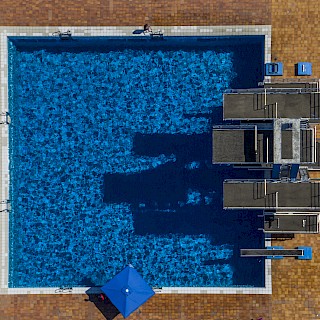 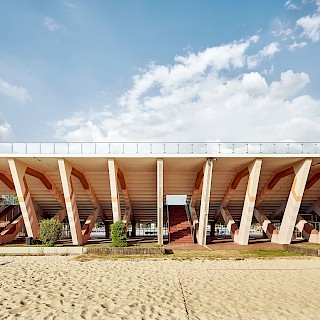 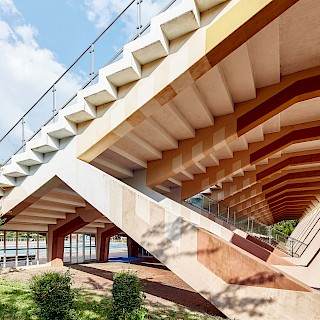 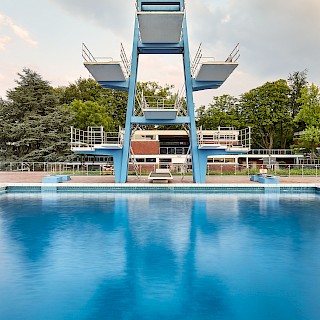 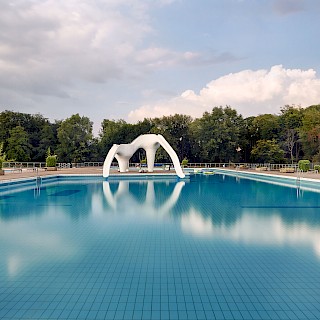 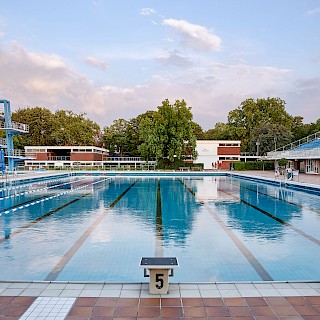 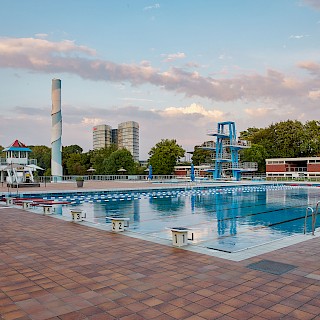 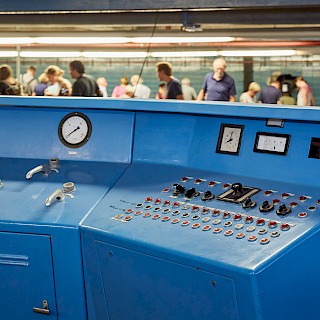